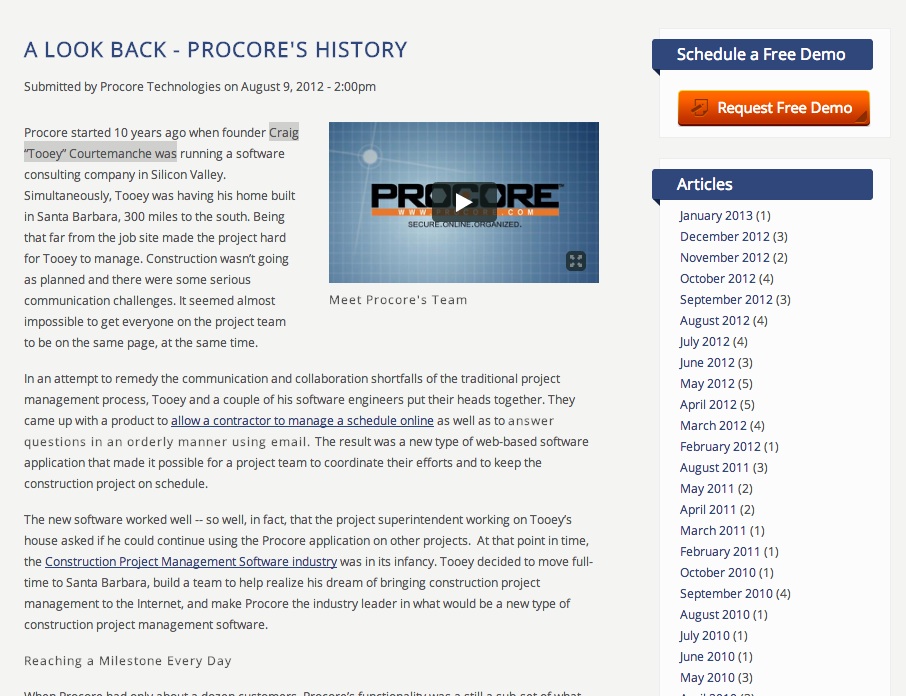 Procore’s blog promoting cloud-based construction software breaks several generally applied rules for successful blogs. The writer(s) depersonalize their observations; the focus is institutional rather than personal. The blog has few graphics. Most critically, virtually all of the postings promote the company’s specific products and services. This is a “selling” blog, which will probably be most effective in providing additional information to current and potential clients already well-along the decision-curve to use Procore software, than in building relationships from scratch.

Nevertheless, the blog uses clear English and you know what you are getting here. After some searching, I discovered a posting describing the company’s history — and sense the careful writing here belies more dramatic undercurrents.

When Procore had only about a dozen customers, Procore?s functionality was a still a sub-set of what the product has now become. Even so, the potential of (founder Craig Courtemanche) Tooey’s??vision for web-based project management was starting to become evident. On a sales call with a client in Los Angeles, the seventy-year old owner of the general contracting firm came into the meeting unannounced. He sat down, obviously interested in hearing the rest of the presentation. At the end of the meeting, he leaned back in his chair and said,??Now?this?is the future of construction. This technology will change the way we all do business and will make us much more profitable.?? Procore landed its biggest account in its history to that point, and years later, that company is still a satisfied Procore client.

Procore Is For Any Size Project

At Procore, the variety of projects managed by our users has never ceased to amaze us.?Some subcontractors will use Procore on a job that might only last a week, while other clients use Procore to manage the construction of?oil refineries, power plants, hospitals, and huge manufacturing facilities.

One of the notable early projects managed by a Procore client consisted of a fireplace upgrade in a private residence. What made this project really stand out was that the fireplace happened to belong to someone who is known to be among the wealthiest people in the world. The project budget was in the neighborhood of $2.5 million!

This is one circumstance where rule-breaking may make blogging sense. If I were the anonymous writer at Procore, I wouldn’t rush to change the blog’s style — it reflects the company’s values and probably its discipline and stability (reassuring qualities for anyone considering a significant software investment.

Nominations for the?Best Construction Blog competition?are open until January 31.?You can learn more and suggest your own blog or one that you like by completing the nomination form here.?

Help Everybody Everyday: Real help in the AEC proposal process