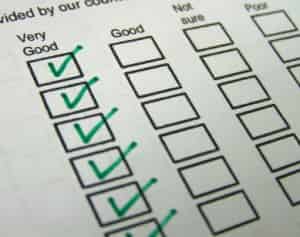 Yesterday, I experienced and heard a story of two situations where seemingly minor details had significant outcomes — though the bigger picture (that of underlying trust and respect) resulted in quick resolutions of the challenges. I won’t name names here, but you may have experienced similar stories yourself.

In the first, the issue was a matter of two letters “ny” that were tacked onto a charity silent auction certificate. I had purchased the certificates for the NHL hockey game (hockey is a big deal here) last summer. My son and I knew that we might not necessarily get exactly the game we wanted, but the “any” provided some reasonable probability that we could pick a higher-value game that would otherwise be rather hard to obtain at low cash cost. (Reflecting our market size and the fact that the Ottawa Senators sells the largest percentage of its seasons tickets to the construction industry here, my business can trade out some seats for advertising — though not on the most popular sell-out games.)

Yesterday, I called the industry supplier to claim my tickets. He said. “We only bought a half-season package, and I don’t think that game is on the list.” ?My response: “But the certificate says ‘any’ game — how could that be?”

He retorted, speaking emotionally: “This is terrible.I’m never going to make a contribution like this again.”

Ugh. I quickly made it clear to him that I had purchased the tickets in support of a good cause, and wasn’t going to hold him to commercial business standards, and I certainly didn’t want him to stop supporting the charity. I asked him to simply tell me which games are available, and we’ll pick from these.

Later that evening (as our beloved Ottawa Senators were blown away in what, to our memory, was the worst game we’ve ever seen them play), the industry supplier sent me another email saying he had the tickets we wanted, and explained what had gone wrong.

It seems he had sent the certificate to the distributor holding the auction with the correct wording. The clerk there made the wording change, and returned it to him, with a note: ?”I’ve made a small change to this certificate. I hope it is okay.” ?He didn’t double-check that indeed, she had changed the “a” to “any”.

Meanwhile, a successful engineer shared his story. He described how he had a masonry contractor’s site superintendent removed from the site on a major job. The problem: The super had completed and closed in some work, without the specified hold for inspection.

The engineer made it clear he wasn’t being a heavy out of spite. He said he has developed strong relationships with the contractors responsible for the work, and this subcontractor’s management knows that he will never hold up jobs unnecessarily for inspections. The site superintendent was new to the job and didn’t know about the relationships, and put up a fight when the engineer expressed his dismay, saying he simply wanted to keep his crew working efficiently. The engineer could tolerate one incident, but when the problem recurred, he pulled out his authority and had the super called off the site.

Here, again, I expect everyone was acting in good faith — the super simply wanted to move the job along efficiently and was satisfied the job had been done correctly, and didn’t know that this engineer (unlike, perhaps some others) is extremely responsive to job site challenges and respects the economics of having workers standing around without anything to do while they wait for the inspection. Hopefully the super will be reassigned to another job where these conditions aren’t so important.

These seemingly unrelated stories touch on the challenge we make when we make assumptions, fail to check details, and then face the issue of what to do when we discover the error. How do we wield authority, if at all? How can we resolve things so that the larger objectives are achieved and we can restore harmony.

The best answer arises from the underlying picture. I certainly don’t think anyone is going to lose sleep over some modifications from a charitable contribution. If “no game” had been available, I would have been happy — I made my contribution in good faith, and would have been happy with that. In the case of the job-site decisions, longer and deeper relationships defined the “what is right” approach here — reflecting the engineer and contractor’s integrity and their mutual respect about how work is to be completed. All of the marketing techniques in the world cannot overcome real-life experience and the reputation/memory that continues from project to project.

So, yes, we should care about the details, but not sweat over them as long as our underlying foundations are strong.

Marketing diagnostics 101: Thinking though your strategy