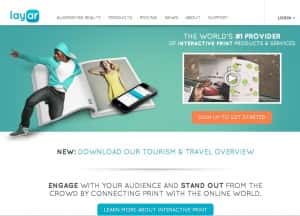 I have a sixth sense that AR, or Augmented Reality, will be an important and vital marketing force sometime in the next few years. Right now, it is a bit early. You can spend a lot of time on this stuff to produce mediocre results. The challenge is that the cost of creating the really good AR content and interface is so great that only a few well-funded early adaptors will try; and the low-budget versions, well, don’t add enough value to justify the effort.

Today, for example, I viewed my first “real” purportedly AR ad. ?It was for a high-end coffee maker, on the back cover of a department store’s newspaper flier catalogue. There was a small reference on the corner left “Layar this ad” — Scan this page to see a video of the (name of product) at work.”

It took a few minutes to find the Layar.com app on the Android phone, and the scan took just a few minutes. But it wasn’t real “augmented reality” — just a musical video purportedly demonstrating the coffee maker. Frankly, I didn’t get it.

Other test examples on the Layar.com page show signs of the technology’s potential, but its limited applications at present. ?The “buy now” buttons might look okay, but there are plenty of other ways to execute a call to action. Layar gives you a free shot at experimenting with the technology, and the entry points for paid service are inexpensive — but it looks like you had better be prepared for some significant budget costs to go far with this stuff.

Yet, I sense that there is potential here. Another AR start-up has announced its beta will be ready soon. There is a race to develop the potential here. It will happen. In the meantime, I don’t think it is quite there.

The three construction marketing essentials you ignore at your peril